Posted by Tseen Khoo on April 28, 2020
You’re under lockdown, and with nowhere to go and nothing to do, you’re writing up a storm, churning out a flood of elegant, insightful prose.

At least, I’m not. But I am finding myself thinking a lot about writing.

In part that’s because I’m in lockdown with my son, who has just started writing. We’ve been encouraging him to do so for a while, but he never really took to it until after lockdown started.

It began with a list of demands. He showed up with a sheet of paper in his hand, over which he’d used felt pen to chisel a series of improvised spellings in jagged capitals for things he needed, like ninja stars. And he more or less hasn’t stopped since then, copying out Lego serial numbers, or making lists of games we should play.

I’d already agreed to write this post - which is about academic writing - when all of this began, but I didn’t see the connection between my son’s writing and what I wanted to say until today.

Which is that academic writing is two things at once: intensely idiosyncratic and inherently social.

Last year, a thousand years ago, in August and September, I organised a series of workshops about academic writing. At each workshop, a different academic spoke about their writing practice and looked at a different aspect of writing. We talked about writing grants, abstracts, and op-eds, and even took aim at the first sentence. We looked at how to insert yourself into your writing and how to bring theoretical and empirical materials together.

I organised these workshops because I think that the craft of writing is something we don’t talk enough about as academics, despite the fact that it’s such an important part of what we do, no matter where we are at in our career.

And I also know from my own experience that breakthroughs in my writing haven’t always come through effort or reflection, but through chance encounters, throw-away comments, and conversations over coffee.

The workshops had a mildly voyeuristic quality that we will all be familiar with, as we stare over the shoulder of our colleagues and friends during Zoom meetings. I was curious to see my colleagues at work, engaged in something that is intensely private. Where are you? How do you prepare yourself? What time of day is it? Do you listen to music when you write? I don’t.

This is the part of writing that is idiosyncratic, like the personalised spellings my son has adopted, and the very specific ninja weapons he needs. There is a lot of advice about ‘good writing’ that overlooks this. We are told to get up early, write regularly, compose drunk but edit sober, use active language, and so on. It seems as if there is a right way to write.

But what came out in the workshops was the variety of highly personal writing practices and styles. Improving writing is more of a journey of self-discovery than the acquisition of a standardised skill set. It’s more about finding what works for you, than mastering technique.

But in addition to being personal, writing is also intensely social. My son started writing because he wanted to tell me something, and I’m writing this post because I want to tell you something. I’m trying to process what’s going on in my own life under lockdown, to relate the current state of things to life before lockdown, and to imagine people out there participating in this sense-making.

All academic writing works in this way too. At the workshop, we spoke often about the different social aspects of writing: co-authorship, drafting and feedback, responding to peer review, spitballing and outlining, brain-picking, editorial intervention, and so on. We don’t just write to communicate; we also need to communicate in order to write.

What academic writing isn’t, then, is a solitary exercise in individual mastery.

It’s a process of becoming as specifically you as you can, coupled with an effort to relate that specificity to others in ways you hope they understand.

I don’t think lockdown will be a productive writing time for many people, and I don’t think it should be. But it might be a good chance to reflect on how writing is like lockdown, in making us social and alone at the same time. 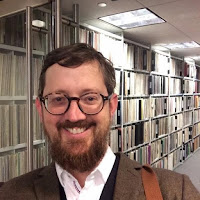 Dr Gerald Roche is an anthropologist, and Senior Research Fellow in the Department of Politics, Media, and Philosophy.

His research focuses on the politics of language, particularly in Tibet, China, and the Himalayas. He recently edited the Routledge Handbook of Language Revitalization, and his most recent article is open access in the journal Patterns of Prejudice: 'Articulating Language Oppression: Colonialism, Coloniality, and the Erasure of Tibet's Minority Languages.'