Exciting news! Dr Lynda Chapple has started at La Trobe as an Academic and Language Skills Advisor in the Learning Hub. In this role, Lynda will have a particular focus on working with graduate researchers around their writing questions. Lynda is available for consultations in person (in Melbourne) and via Zoom. In this post, we invited Lynda to share some insights from her own doctoral experiences.

My PhD experience was, I suppose, like many other people’s: I was excited about intellectual engagement with an academic community and afraid I wouldn’t measure up.

I had been the first in my family to attend university and had a clear case of impostor syndrome. I was also an external candidate, living overseas and holding down a full-time teaching job at a university.

As so many others have noted, it was a lonely and isolating time. I visited my home university when I was on leave back in Australia, once or twice a year, but my main interactions with my supervisors were by email, and I while I had some contact with the broader academic community through my work, I did miss the stimulation that comes from being a student on campus. I had few people to support me or to talk to about my work on a daily basis.

Most doctorates are quite esoteric, and mine was no exception. My research was textually based and involved engagement with some heavy French psychoanalytic, feminist and phenomenological theory, which initially I could not explain to myself, let alone others. As I navigated the complexities and vagaries of Lacan, Irigaray and Merleau-Ponty, I not only experienced serious doubts about my own intellectual capacities, but also about whether this kind of research could make any difference to the world’s collective knowledge, or to anything else. For me, it had no obvious social purpose, and at times I felt as if it were all just narcissistic indulgence – a way to prove to myself that I was smart enough.

My family and friends would ask about my research, but I found it impossible not only to describe, but also to justify in a way that made any sense to those outside academia. Why was I doing this? Why did it matter? I didn’t have the answers, and even friends who had backgrounds in differing academic disciplines would look bemused when I tried to talk about it. I passionately believed in both the value of the arts in a civilised and compassionate society, and the vital role of intellectual enquiry into culture – I still do – but I was starting to question if what I was doing was contributing to either (see John Hannon’s post on How uncertainty and doubt are friends of your research writing).

My early enthusiasm and excitement slowly turned to slightly panicked worry and finally a weary desire to slaughter ‘the beast’, which is how I came to refer to my thesis.

I decided that I needed to do two things that turned out to be more related than I realised. First, I needed to clarify my argument for myself, and then I needed to translate it into simpler terms so that I could try to engage those around me with what I was struggling through.

One evening, while cooking, I started writing out my thesis purpose and claim on the fridge. Just one or two sentences, but that was enough. It was handy, centrally positioned and therefore highly visible, and could be easily edited. It also meant my friends and family were engaged in a daily way with my changing ideas. I found I could talk more easily about it and, if I got stuck, I would just return to the fridge. It was almost a consultative process.

This is only a very small strategy, and it certainly won’t get your PhD written for you, but it gave me the impetus I needed to continue. My thesis took me six and half years to complete. It came together slowly, bit by bit, and when I reached the end of it, I was astonished. How did I get there?

I shouldn’t have been surprised though; belief in myself, slow methodical work and the support of others helped me over the line. Someone once said to me that a PhD is 95% hard slog and only 5% brains, and I now believe this: you just have to keep going, and not expect that you will change the world in the process. In the words of Gerry Mullins and Margaret Kiley: “it’s a PhD, not a Nobel prize”.

Intellectual enquiry, which is the heart of research, is worth doing and contributes in all sorts of ways that you simply cannot see when in the thick of it. A thesis can be a bit of a beast at times, but you will tame it in the end. 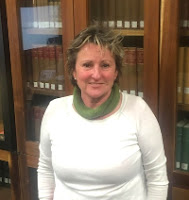 Lynda Chapple has a PhD in English from Monash University, an MA and Dip. Ed. in English and TESOL, both from the University of Melbourne, and is an alumna of La Trobe University where she did her Bachelor (Honours) degree many years ago.

She can be contacted through the Learning Hub, or directly at l.chapple@latrobe.edu.au.
academic writing