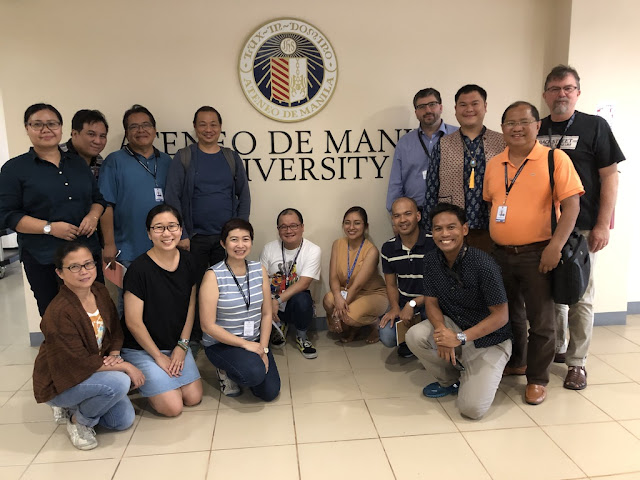 In this post RED team member Dan Bendrups reflects on his recent trip to Manila where he worked with a new cohort of La Trobe graduate researchers.

Every year, the La Trobe University research environment receives a new injection of energy from the arrival of international PhD candidates from all over the world. Some are supported by home country scholarships, while others have been successful in obtaining funding from Australian sources, but for the most part, they come here individually, joining our research programs and finding their feet. We often know very little about their home research environments to begin with, but contrasts and comparisons inevitably emerge over time, and these discussions become part of the international PhD experience.

This year, a new element was added to this mix. Under the terms of a new collaborative agreement with Ateneo de Manila University in the Philippines, a group of six PhD candidates joined La Trobe as a cohort. The agreement means that their candidature time will be shared between Ateneo and La Trobe , thus, their home research environment will pay a bigger role in their doctoral experience. Their supervision is also shared between La Trobe and Ateneo, with a supervisor at each end.

This scenario creates new opportunities for research, but also raises certain complexities for everyone involved. Candidates and supervisors alike will need to navigate between two different research environments, maintaining their local ways of working while also coming to terms with the institutional requirements of an overseas university. Some aspects of this will align easily, while others will likely require a bit more effort and adjustment.

With these challenges in mind, I travelled to Manila in my developmental role in the Research Education and Development (RED) Unit to provide orientation workshops for the candidates and supervisors alike. Over three days, I provided the workshops normally offered in house to new candidates and supervisors at La Trobe, accompanied by activities to provide the candidates with a chance to reflect on and express their own thoughts about the opportunities and challenges ahead of them. This was a fascinating process that revealed some key points that may be useful in reflecting on how we engage with international graduate researchers overall.

The candidates were keen to ensure that their La Trobe supervisors had some sort of understanding of where they were coming from: personally, disciplinarily and institutionally.

On a personal level, they expressed many of the hopes and fears common to any cohort of graduate researchers: personal motivations for pursuing the study, the challenge of juggling the PhD with family commitments (especially young children), etc. However, they also wanted their Australian supervisors to understand what it was like just to be a researcher in the Philippines: the logistical challenges of getting around Manila, a megacity of 27 million, securing access to scholarly resources that Australian researchers might take for granted, patchy internet (I explained that Australia also has its challenges in terms of internet speed).

The candidates had interesting things to say about disciplinarity. While the Philippines, and Philippine Universities, have research strategy documents that speak to interdisciplinarity and innovation, in practice, the candidates noted that it can be tricky to put disciplinary innovation into practice. In their view, there are not really any avenues of support for trying new cross-discipline approaches to research, and so there’s a tendency for innovation to be slowed. This was, they said, part of their interest in engaging with Australia, where they perceived that there was more openness to work creatively and flexibly, and perhaps less lip service to disciplinary tradition.

Finally, the candidates provided some interesting reflections on their institutional environment. Ateneo de Malina is a Jesuit university founded on a long scholarly tradition that has a global reach – it is hardly isolated in this regard, as it is part of an international network of universities sharing a core philosophy. It is a university that long predates the founding of La Trobe in Australia, in a city that had already existed for hundreds of years before the European settlement of Melbourne. This sense of a particular history and philosophy was expressed by some of the candidates, who saw their research as having deliberate, purposeful aims relating to social equity and justice. They were not just interested in the PhD for their own sake, but were interested in making a difference in their community, were extensive social and economic challenges exist.

These reflections have now become part of the induction process for the La Trobe supervisors working with this new cohort of graduate researchers. They remind us that, beyond our commitment to scholarship and the advancement of research excellence, there are also human factors involved in the graduate research journey that are significant and that are an important part of the researcher development process.