Posted by James Burford on June 25, 2019
Where do researchers write? In this article fiction writers talk of productive writing sessions in the subway, on the couch with the TV blaring, and at a café, among other places. And in this article writing spaces range from “small messy rooms that don’t look out on anything interesting”, to bathtubs, beds, hotel rooms or a cabin on the shore. It seems that space is an ongoing interest for writers of all descriptions.


Writing at the office (Lauren Murphy)

I have a desk in one of the Humanities buildings, sharing an office with two other Ancient History HDRs. It's a nice space, there are big windows, shelves for my books, and my neighbours are the university chaplains, who are very friendly and listen to me waffling on about my research from time to time. Some nights they make communal dinners and the smell of delicious food wafts down the hall and reminds me to go and get something to eat.

I've covered the walls in my corner of the room with my own drawings of ancient artefacts, as well as a couple of posters and a long list of French vocabulary words that I need to practice for tackling journal articles that are not directed at monolingual English speakers such as myself. I don't like bare walls, or doors for that matter, so I tend to stick pictures and notices up all over the place. On my shelf I have a blanket, slippers, a mug, a lolly jar, some room spray for when I've been in there too long, and some artificial plants. I started out with real plants but, apart from a tenacious orchid, all the others died miserable deaths during last summer. It gets pretty hot on the fourth floor so I wander over and work in the library when it's uncomfortably warm in my office.

I know that I could work from home in my pyjamas and avoid weather extremes and public transport, but my books are here, and the library is here, and so are my supervisors and my friends. It makes sense for me to come and work here. Having a clear distinction between work and home has helped me create time when I'm not thinking about my research as well. When I'm here I do my work in my little corner of the university and when I go home I don't do any work related to my studies. That's the plan, anyway. Sometimes books mysteriously find their way into my bag for some light weekend reading.


Writing for the Public, in Public (Ilan Abrahams)

I really like thinking and writing in public libraries. There are three or four that I visit, depending on the type of work I’m doing, and where I’m travelling to, after, or for family or part-time work commitments. During breaks it’s fun to thumb through books on the display racks, and also the new purchases.  Hard copies of newspapers and magazines are a bonus too. Touching in on a more general flow of ideas aside from, or around, the things that I’m researching helps with feeling connected and with developing my ideas…how might I be in conversation with other’s ideas, and with issues in the media? How does my personal world connect with the experiences and expressions of others? Working in public spaces seems to help me to nut this out. It also stokes the impulse to write for broader audiences beyond academia.

I’m drawn to writers that negotiate relationships between the personal and broader policy considerations, public debates, or streams of history. Three that inspire me, and that come to mind just now, are Martha Nussbaum in ‘Upheaval’s of Thought’, Clementine Ford in ‘Fight Like a Girl’, and Renee Sephton and Etienne Dinanga in the haunting and beautiful song ‘Let Me Sing Freedom’ . Renee also teaches social work and social policy here at Latrobe.


Another productive place to write for me is on public transport. There is something about being in motion, and being in a space that is not specifically allocated for academic work, that brings me alive. Whether it’s Friday night with footy fans, a tightly packed morning peak hour tram, or a quiet carriage on Sunday afternoon, there’s always something to feed into or frame the work. This week I renewed my annual Myki pass, which gives me access to a vast network of mobile coworking spaces. I aspire to be a public intellectual, so maybe doing my work in public libraries and on public transport is somehow a step in that direction?

Some years back, on a theatre performance residency in Berlin, I set up a writing stall at a busy Sunday market, offering to write on any topic given to me by passers-by. It was a joyful and awkward experiment! – I was bought coffee, and I looked after people’s shopping too. When writing in the local library I’m sometimes annoyed by people talking, or Monday morning nursery rhymes – sometimes it’s easier to write at home or in a quiet postgrad. space in the Latrobe Library - but I’m inclined to think that my most useful research and writing might be that which emerges from an ongoing relationship with the lifeworld. I’m inspired by Heron and Reason’s articulation of a participatory relationship with reality in the realm of research.

Speaking of mobile coworking, would anybody like to join in for a Shut Up and Write session on the 86 tram later in the year? It would be great to write together in public. During the longer break between writing sessions we could get off and have a cuppa together at a café somewhere… Stay tuned for more information closer to Academic Writing Month in November. 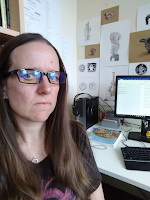 Lauren Murphy is a Classics and Ancient History Phd Candidate. Her research focuses on the reception of ancient Greek vases

Ilan Abrahams is a PhD candidate in the School of Public Health. His is researching health promoting approaches to developing more compassionate university environments. He has previously worked as a theatre maker and an urban designer.