The pleasure of values (Interview with James Burford)

Posted by Tseen Khoo on February 05, 2019
In this week's RED Alert, we interview James (Jamie) Burford, who started with the RED team in July 2018. Jamie talks candidly about his research background and offers some great advice to graduate researchers.

How did you end up researching in the field you're in?

My primary research field is higher education, with ongoing dabbles in gender and sexuality studies. And it is fair to say that I sometimes feel surprised to find that I have arrived in this space.

One way to answer this question is to say that my arrival was unplanned. I followed my curiosity and it led me here. There are also some other answers. My BA was in political science, my Masters was in Development Studies and I came to my PhD via youthwork, community development and diversity education. These histories continue to shape the way that I think about research.


Another thing that led me to Research Education work is that I had a really rough time writing my Master’s thesis. In middle of this rut, I developed a real curiosity about academic writing, what it feels like, and the kind of identity work it often involves.

More broadly, I guess I’ve been following around a consistent set of questions over a number of years: How do people find wriggle room in contexts that seem fairly constrained? How do prevailing political ideologies play out in institutions, like universities? How do changes that occur inside institutions feel for particular constituencies of people? How can we take things that seem common sense, turn them around, and see them otherwise? And the big ethical question of how inhabitants of the university might relate to each other, their institution, and the wider idea of the university itself. All of these questions are threads that I can trace through my doctorate, which was about the felt experience of doctoral education in the historical present. I’ve been fortunate that I’ve been able to continue chasing after these questions first at Thammasat University in Thailand, and now here at La Trobe.

What research projects have you worked on in the past?

I have done work around sexuality, sex and gender minority groups in Thailand and Aotearoa/New Zealand. I have researched sexuality education and diversity education programs in high schools. I have done research on writing a PhD, the political context of the doctorate, and how class and care responsibilities shape the capacity to aspire to doctoral education. I have written about ‘evocative’ methods in social research like fiction and poetry. I have studied conferences as interesting spaces of academic practice. And I have been interested in poking holes in the stigmatization that arises around queer, trans and fat embodiment. I have most recently been thinking about how queer and feminist thinking on shame, hope, failure and depression might help us think about the university in some new ways.

Do you ever have topic envy? If so, what research topic do you fantasise about?

Yes! And discipline envy too. Sometimes, I fantasise about being a historian, other times a cultural studies scholar. Now being an educationalist I’m lucky that I get to draw on a wide array of thinking tools and approaches in my work. But let me come back to envy. I manage at times to hold myself back from a topic that I am curious about which might lead me down a rabbit-hole; other times, I don’t! If there was one topic that I’ve been fantasising about over quite some time it would be a cultural and historical study of academic eccentricity!

They are moments that sounds like “eeeek”, “ooooh” and “ummmm”. The best research moments are those where I have been really stretched. Perhaps I have been rattled by a theory that has upended how I used to see the world and found myself sitting a space of impasse and improvisation. Maybe I’ve been made uncomfortable about some assumptions that I used to hold but don’t seem tenable any longer. Or I might be scratching my head trying to hold two seemingly inconsistent beliefs at once. Understandably, these haven’t always been the easiest moments to be a researcher. But the best research moments for me can hover on that border of pleasure-discomfort-insight.

If you were a graduate researcher again, what would you do differently?

So many things! I would read more. I would sit in the driver’s seat of my project earlier. I would also be gentler with myself (researchers are people, too!). I would send emails to people who I admired earlier. I would ask someone else to water my pot plants.

Do you have any advice to offer on scholarly collaboration and/or networking?

Be thoughtful about who you want to be as a scholar.

Consider enacting those values via collaboration and networking. Do you want to be kind? Caring? Competitive? Critical? I think it is important to figure that out, and do your best to walk that talk. I know that I am not the kind of researcher who finds carrying business cards and schmoozing the easiest of prospects. I invest my energy into working closely with people (inside and outside of the university) who I admire, in relationships built on a foundation of trust and mutual care.

I want to be the kind of collaborator that I am looking for: someone who is rigorous and pushes me to think, and someone who is compassionate and hospitable. I’ve been lucky in my career so far to find a fair number of people like that. I am a believer in being present enough to think “Hey, this person is cool! We should do something together!”. I listen to my gut on stuff like that rather than applying some kind of strategy.

I also seek out pleasure. I started a blog called Conference Inference with my friend Emily Henderson because I knew it would be fun to work with her. That is in alignment with my values as a scholar! 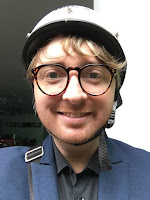 Dr James Burford is a Lecturer in the RED team. Prior to working at La Trobe, he was a Lecturer in Learning Sciences and Education at Thammasat University (2014-2018).

Jamie is an Associate Editor of Higher Education Research and Development, and serves on the Queer Studies and Education International Advisory Board. With Emily Henderson, he edits the academic blog, Conference Inference.