Posted by Unknown on February 28, 2017
In October 2016, I won a $500 prize for best peer-reviewed article at the Victorian Community History Awards.

The award was given for a piece I had published for Provenance: The Journal of Public Record Office Victoria. My research was a case-study of the post-World War One soldier settlement on Ercildoune Road, near Ballarat.

By showing both the benefits and challenges of publishing my first peer-reviewed article, I hope to encourage fellow students to submit to academic journals.

My article was based on a 5,000 word essay I wrote in 2012 for Dr. Charles Fahey’s Honours-level subject, ‘Across the Divide’, based on the history of rural Victoria. I used archival material from the Public Record Office of Victoria and a rare memoir written by Jean McCartney, a descendant of a soldier settler on Ercildoune Road. I received an A for my essay and it became a key milestone toward attaining First-class Honours.

I decided to turn my essay into an article at the start of my PhD, when I began the research for a dissertation on human rights in Botswana. With such a strong set of marks, I thought the process would be simple. I found three key challenges to publishing an article: the waiting time, the academic criticism, and the editing.

In February 2013, I submitted to an academic journal that published on the topic of Victorian history. After waiting four months, I gave up and informed the editor that I had withdrawn my article. Remarkably, I did not get a response until June 2014, simply stating: ‘Thank you for advising us on this matter’.

I talked to no-one about the submission and knew very little about the journal I was submitting to. I perhaps paid the price for not consulting with more experienced colleagues on deciding which journal to submit to and how long I should expect to wait.

In April 2014, one of the senior academics in History pointed me in the direction of Provenance. I spent a few days re-polishing my draft and submitted it again. In June 2014, I was informed that the editorial board recommended the article for peer-review.


Four months later, I received a response from the editor with reports from the anonymous readers. Their comments were extensive, thoroughly detailed, and brutally honest. One reviewer enjoyed the article but had numerous suggestions, while the other reviewer had many points of critique. The editor’s decision was to accept with major revisions.

Today, I would consider such feedback to be generous and helpful. At the time, however, I thought the readers hated the article and I could not see myself meeting their standards.

I decided to withdraw the article. The editor appealed for me to reconsider and submit again the following year, but I still had doubts.

After I withdrew, Charles offered some sound advice on following my own judgement. The reviewers made some very good points, but if I felt the reviewers wanted me to go beyond what was needed for the article to achieve its aims, I did not have to follow their requirements entirely. Ultimately, it's the editor’s decision whether to accept the article.

Now, when I submit to journals, I include with my revised draft a list of all the issues mentioned by the peer reviewers and how I have addressed them. If a reviewer has included extensive feedback or critical comments, it can often be a sign of support and interest in the work they are reading.

Over the following summer, I returned to the article and read the corrections carefully. In my view, editing can require a lot more work than the task of writing a first draft. The readers’ reports forced me to add more historical context, answer new questions, and engage with broader fields of scholarship – all while reducing the word limit!

When I re-submitted the piece, I was thankful the editor remembered me and still backed the article. We worked together over the following months to add images, tighten the expression, and fix references.

Once the piece was published, I felt like a true ‘academic’. And there were other benefits, too. When I shared my article on Facebook, I received a long and emotional message from my friend Emily, who I had known in school. The key memoir I had used was written by her late grandmother!

Emily and Jean McCartney do not share the same last name, so I had no way of knowing the connection. Emily told me that Jean, who thought few would ever read the text, would have been proud that someone had made use of it.


My advice for fellow graduate researchers is to give it a go and send off that first article. For most, the first attempt will be difficult and may result in a knock-back but this is an opportunity for self-development, not a reason to walk away altogether.

From the Provenance article, I learned how to find more depth in my arguments, showcase the importance of my research, and sharpen my expression. I also found inspiration for my attempts to publish my main work on human rights history, where I was prepared for both rejection and acceptance.

As researchers, we are worth more than the sum of our publications and awards. Through these experiences with the process of publishing, I've found that it brings many hidden benefits that help define us as emerging scholars, civic-minded researchers, and resilient individuals. 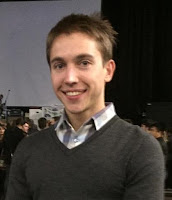 James Kirby is a PhD candidate in history at La Trobe University in Bundoora.

In 2012, he attained a first-class honours result in history, earning an Australian Postgraduate Award (APA) scholarship. In 2014, he completed a research trip to Botswana and the United Kingdom, funded by La Trobe University.