Posted by Unknown on December 13, 2016
Academia is just a lot of sitting around and thinking, right?

Not always! And if you’re a field ecologist, you get to become really dirty, too.

Ursula has recently returned from fieldwork on the Tawaki project, which explores the behaviour and ecology of New Zealand’s elusive forest penguins.

She has written about the experience for us here at the RED Alert.

We decided to call him Hank.

He was a small but dedicated male penguin attending to his fluffy 1-week-old chick in the cosy cave he had chosen for raising his family. Mum was foraging at sea as is typical for Fiordland penguins (otherwise known as tawaki). Maybe Hank would join her in a few weeks, battling the surf, once junior was a bit more grown up and better able to look after himself.

Many of his neighbours in more open nests had already lost their offspring to stoats and were now attending empty nest bowls. Left without the demanding job of raising their young, they started to squabble and fight among each other. Not a good neighbourhood to raise your chicks, even without the looming threat of a next stoat attack!

Finding him in this predicament, we started to trap stoats around the last remaining nests. A win-win for all, since we needed active nests for our research into the marine ecology of this enigmatic penguin species.

Although we were quite successful, we were well aware that our trapping efforts would do little to reduce the overall impact of this year’s plague of stoats. It was a proverbial drop in the ocean.

The New Zealand Department of Conservation is hugely under-resourced and the beautiful West Coast forests have grown silent, with not a sound apart from the crashing of waves and the odd call of an oyster catcher on the rocky shore below. Few visitors to New Zealand are aware of the missing “soundscape” and most will only take pictures of stunning landscapes completely unaware of the death surrounding them.


I'd just worked two weeks on Codfish Island, the predator-free Kakapo haven in the west off Stewart Island, which is buzzling with endemic birdlife. I was very much aware how this forest should sound like. The West Coast silence hit me like a punch in the face. As much as I love my research and the 'Eureka!' moments when pieces of the scientific puzzle fall into place, it's hard work staying an optimist while documenting the struggle of endangered species in this increasingly challenging world.

You may be wondering how I got here? Retrospectively, it all makes sense: I grew up in a family of scientists with an unhealthy fondness for academia, spending heaps of time outdoors observing, and never getting straight answers to all my burning questions (and thus learning to do research myself at an early age!). Today, I catch myself not giving straight answers to my kids’ straight questions and seeing the same rolling eyes I must have displayed when losing patience with my professorial relatives. "It must run in the family!" I think to myself, while quietly grinning under the dripping rim of my hat.

Fieldwork in remote areas has lots of challenges. The immediacy of it certainly takes your mind off other things! We've braved torrential rain, landslides, and six-metre swells while clambering on rocky outcrops in search of penguins in the thick coastal forests. The penguins carry our expensive GPS dive data-loggers on their foraging trips. Given these working conditions, it's hardly surprising that so little is known about New Zealand’s elusive forest penguins.

But I had better pay attention to what I'm doing right now... There was Mrs Hank, an athletic female tawaki already well up the bouldery beach, heading towards the penguin breeding areas.

I caught her just in time and swiftly relieve her of the GPS logger before she dived into the dripping wet West Coast forest. "Thank you for your cooperation", I mumbled, releasing her up the track she was planning to take. She hurried on uphill to feed her hungry chick. The data on the logger was well worth the effort!

Tawaki face many threats ranging from introduced predators to fisheries interactions, pollution and climate change. This season, we deployed 30 GPS loggers on nesting tawaki at three breeding locations along New Zealand’s rugged and inaccessible southwest. The data we obtained will not only contribute to shedding light on tawaki marine ecology, at-sea behaviour, and foraging hot-spots, but also enable us to inform effective conservation management decisions.

For me, this is what it’s all about: trying to make this world a better place for humans and other wildlife. 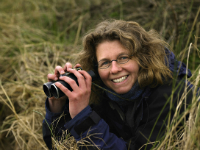 Ursula Ellenberg is an ecologist with keen interest and broad background in both terrestrial and marine systems.

She joined La Trobe in 2014 as a lecturer in the Department of Ecology, Environment and Evolution. Ursula is advancing conservation science with her team of enthusiastic and self-motivated students. She thrives on understanding how environmental disturbances and threatening processes impact animal physiology, behaviour, and ultimately population persistence.