Posted by Tseen Khoo on August 23, 2016
Let’s start out by saying my topic isn’t exactly easy.

Doing research on human rights in repressive states is no dance on roses, as we say in Denmark. Unless you step on the thorns. But it does involve a lot of fun, too.

I remember my very first interview.

I had invited a famous, young, female human rights activist in Kazakhstan for dinner to interview her. She decided on the venue and, at 8pm on a rainy Friday evening in early April, I rocked up to the restaurant that she chose in upper Almaty.

The place was called “Kishlyak” and was serving Uzbek. It was one of those typical post-Soviet restaurants with wooden benches, kitschy interior, live music, and drunken parties full of beer bellies and stiletto heels at every table. There was a distinct smell of beer, cheap perfume, vodka, plov (the Uzbek national rice dish), and a bit of pee stench, too, it must be said. The music and noise was so loud that it was almost impossible to have a conversation.

Having a proper interview would be impossible in this setting.


Aigul* walked in through the entrance, I recognised her immediately from the pictures I had seen of her. She was a charming young Kazakh woman. We greeted each other, and she asked what kind of beer I wanted. I should've known this setting would involve (heavy) drinking. I forgot how things worked in the former Soviet Union.

So, we ordered plov, large pints of German beer, and started a long, tipsy conversation about freedom of speech in authoritarian regimes. We talked about sexism, feminist activism, and her life. She told me about her hard upbringing, about how she as a young child worked in her parents’ restaurant and got sexually harassed by the male customers. About how she found her way to the the big city of Almaty, and how she started being a political activist.

And she told me something that has stayed with me: to be involved in human rights, you need courage, first and foremost. Courage to face the repression, persecutions, and fear. I must admit I admired her.

Around midnight, she grabs her phone, and asks me if I want to join her and her friends for karaoke. I laughed, thinking that this odd night could not get weirder, and accepted.

We took a pirate taxi to the outskirts of town, where a dodgy little house advertised VIP Karaoke with LED-lights and colourful lamps. The road was muddy and frozen, and all was quiet around us. I was thinking: “Where the hell are we…?”.

We went in, and all the walls were black. There were golden glittery decorations and tacky red Chesterfield sofas everywhere. To me, it looked more like a brothel than a karaoke-bar. The place was largely deserted, and we headed for the middle table where her friends were sitting. The table was full of beer mugs, a vodka carafe and some half eaten snacks. In one of the red sofas, there sat another famous human rights activist. I was honoured to meet her, despite the bizarre setting. On the other sofa, with her, singing an old 1990s classic song I do not remember (as I wasn't entirely sober myself), was MY OLD RUSSIAN TEACHER from fifteen years ago. All of them were way more drunk than us, and the singing was gut-wrenching. Last time I saw my Russian teacher in 2002, I did not expect our next meeting to be in this setting!

We all had a joyful night, I remember singing one Spice Girls song on stage with Aigul. We forgot everything that night, just singing our hearts out. It must have sounded awful. But our friendship started there, and that was how I became embedded in my fieldwork. It was a truly anthropological experience.

I was supposed to be gone for only six months, but I ended up doing fieldwork in all of the Central Asian countries for 377 days. I made it through despite systematic surveillance of me, my contacts and my friends; a massive earthquake; two internships; an intense break up; PhD frustration; crossing a border every two to three weeks; falling in love; visa issues; and many, many interviews and meaningful conversations with professionals and activists in my area.

After this immersion in Central Asia, I realised that Aigul was right about having courage, and this also applied to me. To do this kind of fieldwork, you need to be courageous. To deal with repression, surveillance, even risk seeing your friends go to prison. It was worth every bit.

Now that I know what it takes, I am ready to fight for a positive change in this region, through my research. And it involves a lot of fun, too.

* The name of my interviewee has been changed. 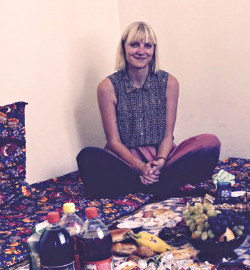 Mia Tarp Hansen is in political science, in the third year of her PhD on civil society and human rights in Central Asia.

She has been embedded in the Central Asian region since she was a teenager, and simply never fell out of love with the place.

Photo sourced from Mia:
"A photo of me from a wedding that I randomly got invited to while I was living in Tajikistan during my fieldwork. As there had been armed clashes in the capital a few days before, our workplace didn’t recommend us to go - but we ditched the advice and had an awesome (and safe) time with the hospitable hosts. How are you supposed to meet the locals if you isolate yourselves from them?"
anthropology fieldwork international experience interviews PhD experiences