From PhD to high Arctic - my postdoc experience (Emma Bland)

Posted by Unknown on August 16, 2016
I’ve just started a 3-year postdoc in middle atmospheric physics at the University Centre in Svalbard (UNIS).

Located in Longyearbyen, Norway, way up in the high Arctic at 78° latitude, UNIS is the world’s northernmost higher education institution.

So, how did a PhD graduate from La Trobe wind up living on Svalbard?

First, there are some world-class research facilities here, including an optical observatory for studying the Aurora Borealis, and a brand-new radar that is part of an international collaboration of which La Trobe is also a member.

Second, I visited Svalbard for a conference two years ago and went home feeling rather inspired! It seemed like such a fun place to live, with many opportunities for hiking, skiing and snowmobiling adventures, as well as unique wildlife and spectacular mountain scenery.

You can imagine my delight when I discovered that UNIS was advertising a postdoc position during the final year of my PhD candidature!

With zero experience on the academic job market, I didn’t know what to expect when I submitted my application. The online application required my CV, academic transcripts, publications, and a research plan. At the end of the form, I was asked to tick a box stating that I consented to my personal information being released in accordance with the Norwegian Open Files Act. This seemed akin to checking the “I have read the privacy policy” box on an online form – of course, I haven't read it, just sign me up already!

So, it was a bit of a surprise when, a few days after the application deadline, I received a document from the hiring committee stating the names, dates of birth, employment history and education of all the applicants.

I learned that six other people had applied for the position. Some applicants, including me, were PhD candidates nearing completion, while others were several years post-PhD. I joked that I now had enough information to eliminate my competition! More seriously, though, I actually felt a great sense of relief. If nothing else, this experience would be an opportunity to obtain some constructive feedback that might help me with future job applications.

Unknown to me at the time, this initial report was merely a trailer for what was to come. About a month later, I received a second report evaluating each candidate’s suitability for the position, based on their research experience, publication history and research plan. The comments were frank, and some candidates were identified as unsuitable for the position. At the end of the report, the candidates were ranked and the top three were offered an interview. I was ranked third.

It turns out that this transparent academic hiring process is the norm in Norway. While my opinion may be coloured by the fact that I was ultimately offered the job, I think this process is fabulous. It was clear from the report what the hiring committee was looking for, and I could easily understand the merits and weaknesses of my own application relative to the other candidates.

My interview was conducted over Skype and lasted about 45 minutes. There were three people on the panel – two academics and an HR representative. We spent roughly half of the interview discussing research, and the other half talking about living in the high Arctic. I was asked about my hobbies and what contribution I could make to the local community. This is very important in a remote settlement – the people I write papers with are also the people I will go hiking with on the weekends!

I was offered the position in October 2015, on the condition that my PhD was passed by July 2016. Looking back, it was helpful to have an incentive to stay motivated in the months before submission, but it certainly added to the stress and uncertainty of the submission and examination processes.

The big move north happened at the end of June 2016.

It's midsummer, and the town of Longyearbyen is filled with beautiful wildflowers, birds and reindeer, all making the most of the 24-hour daylight and balmy 10°C temperatures! Svalbard is also home to about 3000 polar bears, so it is necessary to carry a rifle and flare gun for protection when leaving the settlements. What a unique part of the world! I’m keen to make the most of it. 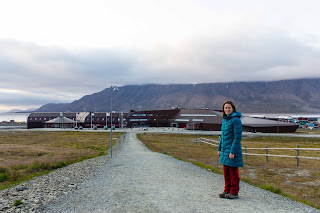 Emma Bland completed her PhD in space physics at La Trobe in 2016, and is now a postdoc at the University Centre in Svalbard.

You can follow her Arctic adventures on her personal blog.

Just wondering if the reports from the interview panel were also circulated? I think that this is a wonderful process - keeps everything above board.