Why litter? Not enough bins? (Lucie Semenec and Jen Wood)


Our second Department-organised litter clean-up day was held at La Trobe University's Melbourne Campus on 13 May.

We'd spread the word a bit wider this time and were joined by litter-busting volunteers from across the Campus.

Volunteers included those from the Microbiology, Zoology and Ecology departments as well as some RED, and GRS team members. We were also joined by Craig Allen from the Environmental Operations Office, who provided some materials for use in gathering litter.

This month, we focused on car parks at the University to see where the litter begins, as staff and students enter the uni to start their hard-working day.

Even at the ‘cleanest’ site, our collectors were able to find over 50 pieces of litter without breaking a sweat, while at the worst site, more than 250 pieces of rubbish were collected! (Figure 1)

So, what litter were we finding? In line with our previous rubbish-collecting efforts, cigarette butts and lolly wrappers featured prominently but, this time, we noticed a high incidence of waste packaging from takeaway food (Figure 2).

In fact, there was a high correlation (r = 0.91) between takeaway food and discarded plastic (recyclable) drink containers and bottles, which makes sad sense, as the two go hand-in-hand (Figure 3).

Everyone eats on the go, and no-one likes the smell of left-over take-away food getting into your car upholstery, but cleaning your car by dumping trash into the carpark is not okay.

Two of our volunteers noted that the closer they looked, the more cigarette butts they saw. At first, it was hard to detect all but the most obvious butts, but in the end, they only managed to cover a small area near a bus shelter due to the density of littering, and picked up hundreds of butts. This echoed our observation from our first clean-up day, where we found the more we looked, the more obvious the litter became.

In total, one entire bin was filled with trash and half of a recycling bin was filled with very easy to dispose of recyclables (like empty water bottles). Would we seriously throw a water bottle in the middle of our living room so it could sit there for many years to come? Or, would we throw it in a bin?
So, the question really is: why are some of us not disposing of our litter in a responsible way?

Perhaps the answer is not that we are filthy pigs, but rather we just don’t have a bin near us. Sure, that means some of us are just a bit lazy to hold onto our trash until we find a bin, but at least we are not just filthy pigs! Well, most of us aren’t…

Or perhaps users of our campus think that it gets cleaned, so it's acceptable to throw small bits of litter all around.

This couldn't be further from the truth. In fact, the campus relies on people taking their rubbish with them or disposing of it in bins, as there is very limited support for formalised litter collection.

One possible solution is simple: should we consider providing more bins in the carparks and an education campaign that stresses the importance of keeping litter off our campus?

For now, what needs to be realised is that litter is not cool or funny or neutral. Its ugly, stupid and harmful.

Please come join us for the third litter clean-up day being held on 10 June 2016.

The more of you who come, the cleaner our campus will be, and perhaps people will start to notice that dropping litter is not cool.

Contact Lucie or Jen to express your interest in attending, so we can prepare the materials for collecting litter. 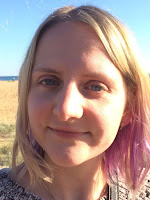 Lucie Semenec completed a Bachelor of Science (Honours) at the University of British Columbia and a Master's of Science in Molecular Biology and Biochemistry at Simon Fraser University in Canada.

She is currently completing a PhD specialising in Environmental Microbiology at La Trobe University.

Her research is focused on the characterisation of electron exchange interactions between electrogenic (electric current producing) microorganisms. This research has applications in microbial fuel cell technologies including bioremediation, power production and microbial biosensors. Lucie tweets at @luciesemenec.