Theory by the tramload (Melissa Kennedy)

How do you make social theory ‘social’?

This was the question our Planning and Social Theory Reading Group asked ourselves as we developed the idea for a social theory salon. This idea went on to be generously sponsored by the Graduate Research School and College of Arts, Social Science and Commerce's Intellectual Climate Fund.

Importantly, we wanted to ensure that the event would complement the purpose of our reading group, which informally gets together to discuss the application of social theory to our studies in a space where we can 'grapple-in-common'.

While modelling the event on a French Enlightenment-style ‘salon’ evoked an interactive setting for the discussion of ideas, would it be enough to spark broader interest in a social theory gathering?

And where could we hold it? Should it be on campus? What if we took theory ‘downtown’ and held it on a tram...? Would it be distracting, maybe a little too much fun? What if it all went off the rails (literally and metaphorically)? Do we just do it anyway?!

Luckily, both the Graduate Research School and our guest speakers didn't need much convincing about the venue choice and our super team put the plan into action.

On a hot and humid Friday evening in October 2015, a diverse grouping of salonists made up of graduate researchers and academics, gathered at Bendigo’s Rosalind Park, mingling under a thunderous evening sky.

Being mobile was an especially novel way to animate the theoretical perspectives underpinning this discussion, particularly as we traversed Bendigo’s gold-rush adorned streets and considered the creativity of cities through the historical development of aesthetic patterns and forms.

Talking about theory and creativity ‘in place’ turned out to be a key strength of the tram, and a testament to the creativity of our speakers!

Inspired and refueled after a brief break for refreshments (and some impromptu tram maintenance!), we grouped into two discussion tracks facilitated by academic supervisors and mentors who shared important insights into how they apply theory to their own work.

These tracks provided the opportunity to discuss and debate frequently recurring concepts in our reading group over the year such as ‘agency’, ‘power’, ‘assemblage’  ‘resilience’, and expand on linkages with creativity in response to the earlier discussion.

As the tram entered its final stretch, we had the opportunity to take these discussions further by regrouping in an open question and answer session. Debate ensued around the theorising of creativity itself as an urban construct and its potential for rural and regional settings.

Comments emphasised the sociality of the event in bringing researchers together, and the intellectual stimulation offered by discussing theories, concepts and ideas in an unconventional setting and format.

Most importantly, the event exceeded the expectations of fostering an intellectual community around social theory by bringing together candidates from different campuses and varied disciplines such as English, planning, sociology, marketing, and visual arts.

Energised by the demand for keeping social theory discussion flowing, we have gone on this year to host a panel on social theory applications (supported by the Department of Social Inquiry).

We would encourage anyone thinking about getting involved in a reading group (or starting their own) to jump on board!

You can find the theory tram salon tweets at #HDRtt. 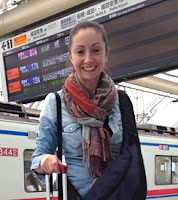 Melissa Kennedy is research assistant and PhD candidate in the Community Planning and  Development Program.