Livetweeting a conference for the first time (Murray Neuzerling) 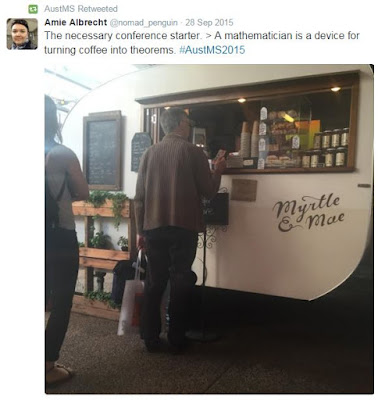 Twitter is the opposite of how mathematics is typically communicated.

When you're aiming 140 characters at the general public you don't have room for fancy mathematical words like "automorphism" or "ultraproduct".

You have to sacrifice accuracy and pedantry for the sake of understanding.

A mathematician on Twitter has to learn an entirely new way of communicating.

And we absolutely should!

I've been building it up since then, learning how to coordinate social media for an organisation along the way. The biggest challenge was livetweeting the 2015 meeting of the AustMS.

Livetweeting conferences is still very rare for my field of mathematics. Social media in general isn't looked upon favourably. I've heard the attitude that a student who is on social media or blogging is wasting time that should be spent doing research. But there are a few mathematicians on Twitter who recognise the merits of public tweeting, and they were my allies throughout the week.

Using the hashtag #AustMS2015, I recruited the help of some fellow tweeters and livetweeted the proceedings and plenaries from the official account.

I even got to livetweet Terence Tao!


For those of you not in the know, Terence Tao is one of the most recognised mathematicians in the world. He's even been called "the world's best mathematician". Tao was one of two speakers at the conference who hold a Fields medal - the equivalent of a Nobel Prize for mathematics. In particular, Tao is the only Australian to have ever received the prize!

The conference livetweeting was a success, with a busy Twitter following and three new Twitter accounts by the end of the week. And, remember, this is all from a community that doesn't do too well with social media.

It was a learning experience for me, though, and I'm sure I'll do better next year. In particular, I underestimated the amount of preparation that goes into livetweeting a conference. I should have had many more tweeters lined up ahead of time, and I should have an injected the hashtag into every piece of conference material. I wasn't prepared when Christopher Pyne opened the conference.

For now here are 10 lessons that I picked up from the experience, in tweets.

Or if you’d rather have them straight up:

1. The first 10 minutes of a talk are usually the easiest. Spread their content out over the full hour.
1a. This also has the benefit of making it unlikely that you'll tweet material that people would prefer be kept secret.

2. Totally lost in a talk? Check Wikipedia for tweetable content. A definition of the main subject of the talk works.

3. People really like photos. Photos don't have to be great, but an Instagram filter can help if they're blurry.

4. Tweet awards, and what they're for. Get the award schedule ahead of time.

6. If the speaker isn't on Twitter (they almost always aren't), tag their institution. Great way to get retweets.

7. Recruit people ahead of time to help tweet. Then say hello to them in person at the conference.

10. People not on Twitter will want to follow anyway. Have a link to the hashtag stream ready for them.

Murray Neuzerling is a PhD researcher in the Department of Mathematics and Statistics, La Trobe University.