#LTUacwrimo livechats - How to join in 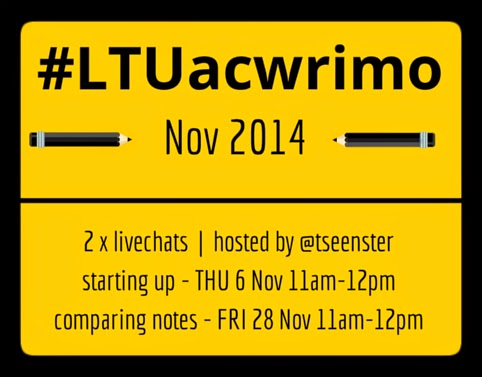 This year, #LTUacwrimo will feature two Twitter livechats to kick off and conclude Academic Writing Month!


Join in the first livechat to share tips and strategies for finding time to write, writing schedules, what to do about writer's block, and much more! It's a great chance to meet other La Trobe participants involved in the #LTUacwrimo challenge.

The second livechat gives you the chance to share how you went during the challenge, things you've learned, and successes and obstacles you've had. It will also feature the announcement of the #LTUacwrimo photo competition winner!

>>  If you've done Twitter livechats before, drop the 2 livechat dates/times in your diary and we'll see you then!

>>  If you haven't participated in a Twitter livechat before, read on! Don't worry - it's easy!

In this case, we're using #LTUacwrimo. This means you can follow everything anyone is saying about #LTUacwrimo by checking this tag. See what has been said using the tag so far: #LTUacwrimo

You can also follow a hashtag in your Twitter client like Tweetdeck or Hootsuite. Just set up a search for the hashtag and all of the tweets with that hashtag will show up in the search window. Familiarise yourself with these platforms before the livechat.

Have fun! The livechats are sharing, informal conversations with your colleagues and peers.

For the first: Get to know how who's in the challenge, and how they're tackling it.

Follow them through November (using the #LTUacwrimo tag) and continue your conversations.

Then meet up again for the second livechat at end of the month and see how everyone went - share those experiences and successes.