Day Five - the Magic of Mentors

Well, we have reached DAY FIVE of the November Writing Challenge! We hope that the past week has been productive and satisfying. We suggest that mid-challenge you take the time to evaluate your progress: Have you met your targets? What has worked and what has not? Being conscious and reflective will help you to improve your writing processes. If your writing program has not been the tremendous success you had initially hoped it would be, use the weekend to have a day off and recommit ready for next week.  You might like to check in and update us with your mid-Challenge progress and maybe recommit:  https://www.surveymonkey.com/s/52HKKBX

It is commonplace in academia to collaborate intellectually with other researchers and to seek the input and guidance of senior staff who have particular expertise in your field of study.
Knowledge about the processes by which we shape our research into prose, how we express and structure our ideas, how we draft and edit, is often given little attention by academics whose focus is captured by the content of their research rather than its communication. Writing is, however, what unites us as researchers. Despite the disparate disciplines that we inhabit, as academics, we each share the responsibility to disseminate our findings, to open our work to criticism (and, of course, acclaim) and to mobilise our research so that it contributes to enduring scholarly conversations.

Today’s guest blogger is Professor Hylton Menz, an NHMRC Senior Research Fellow and leader of the (charmingly named) Lower Extremity and Gait Studies (LEGS) program at La Trobe. Hylton has broad research interests and an enviable record of publication. He has, in fact, published over 160 papers in podiatry, gerontology, rheumatology and biomechanics journals and he is Editor-in-Chief of the 'Journal of Foot and Ankle Research'. In this piece, Hylton shares with us some words of writing wisdom, highlighting the centrality of publishing to the academic enterprise, the place of creativity and flair in scientific writing and the importance of being aware of the variety of dissemination avenues that exist for scientists. It is reassuring to know that even scholars of his calibre suffer from occasional bouts of writer’s block and he is generous enough to share with us what he does when - as he puts it - ‘the muse has left the building’. Hylton’s reflections on writing are informed by his significant experience as a successful researcher and writer; his sage advice reminds us of the value of engaging with other scholars not solely for their specific disciplinary expertise, but for the processes that they employ to write. 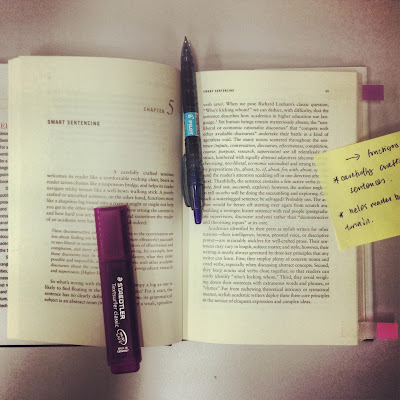 WRITING FOR PUBLICATION: SOME REFLECTIONS

1.    Writing a paper is not merely the final step in the research process

Writing for publication is often depicted as the final step in the research process. This is undoubtedly true in a chronological sense, as studies have to be designed, ethics obtained, data collected and statistical analysis undertaken before a paper can be written. However, considering academic writing as merely the final stage in a process in some ways diminishes its importance. Research ideas and unpublished data are simply disjointed pieces of a puzzle of very little inherent value until they are assembled into a coherent structure by the writing process. In this context, writing for publication needs to be viewed as the ultimate goal of all the activity that precedes it, as research studies don’t really exist until they have been distilled into a readable form for a scholarly audience.

2.    Scientific writing is formulaic, but still has scope for creativity

Academic writing, at least in the scientific disciplines, has to conform to a fairly rigid set of formatting rules. These rules are there for good reasons, as scientific papers are largely utilitarian documents rather than creative works – the goal being to transmit information clearly rather than inspire passion in the reader. Authors nevertheless have a wide range of grammatical and vocabulary options when formulating a manuscript which can be used to reflect their particular ‘style’, and despite the tight constraints imposed on manuscripts, there is no doubt that some papers achieve their utilitarian goal with a little more flair than others.

3.    Writer’s block is a genuine but avoidable problem

Despite scientific papers being highly structured, the writing process requires more abstract thought than merely filling in the gaps with words, and as such, writer’s block is a genuine problem that academics may be confronted with. Although it rarely reaches the sustained level of paralysis that can afflict creative writers, it is not uncommon for academics to find themselves wasting a much-cherished block of time set aside for writing by labouring over the same introductory sentence several times, and then finding that the inspiration has rapidly dissolved with little to show for it. Rather than becoming despondent about this, it is important to recognise that for a myriad of (largely unknown) reasons, some days are better for writing than others. The best way to deal with this is to reallocate the time for something else and return to the writing later, as no amount of persistence will fill a page if the ‘muse’ has left the building.

4.    Writing for different formats can hone your skills

Although the journal manuscript remains the primary currency of academia, other forms of writing are becoming increasingly important avenues for the dissemination of scholarly material. Writing for blogs or online media platforms such as The Conversation requires a very different approach to a journal article and can be initially quite challenging. However, the skills learned from writing this sort of material, particularly the ability to express complex concepts in a concise manner, are very valuable and can have benefits for the more traditional forms of scholarly writing.

With this in mind, we encourage you to ask your peers to read your work and to provide you with feedback and that when you engage with your academic mentors query them explicitly about the processes that they employ to write. Often, advice of this nature will be incredibly insightful and useful. In fact, the Faculty of Health Science went and did the hard yards for us by asking four of their Professors for their advice on publishing. You can read their 'Collective Research Wisdom' here.
You also might like to take a squiz at this video of Associate Professor Helen Sword talking about academic writing and productivity. If you are getting excited about collaboration, peer review and mentoring you should consider establishing an academic writing group. Here is some useful advice on the subject from Charlotte Front.
We'd love to hear about the great advice you've received about academic writing from peers and mentors! Post it in the comments section below and share it with the Writing Challenge community.

That's all from us for this week. Have a great weekend and a well deserved rest!
Academic identities AcWriMo Disciplinary writing norms Dissemination LTUacwrimo Mentoring Peers Writer's block